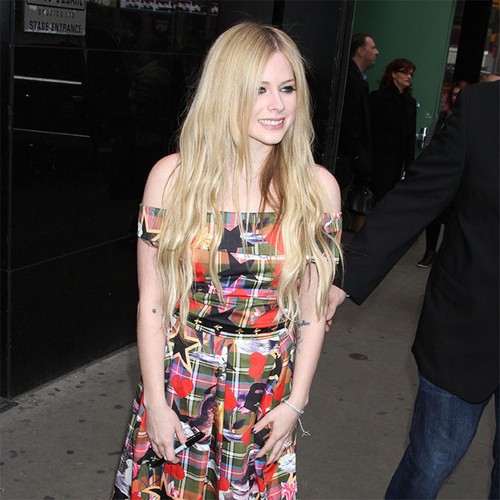 The ‘When You’re Gone’ hitmaker has just released her debut song on the Blink-182 rocker’s DTA Records, ‘Bite Me’.

And the 37-year-old star has explained the reason she chose to sign to his label was that it was a “natural fit” as they always have a “blast” in the studio together and he allows her creative freedom.

Speaking to Zane Lowe for his latest ‘At Home With’ series on Apple Music 1, she said: “Well, it all started with Blink 182 being one of my favourite bands.

“And I have admired Travis my entire career.

“We worked together on ‘The Best Damn Thing’ on that album and he played drums.

“And then on this, Travis is producing, we’re writing together and we just had such a blast collaborating in the studio.

“Now, I’m signed to DTA Records, which is his label, and it just felt like a natural fit it and it made sense.

“And I think creatively, we just click, he gets me. Working with Travis, you’re totally right.

“Where he’s like, ‘Well, what do you want?’ And he’s like, ‘Here’s my opinion. Here’s what I think.’ But ultimately he’s like, ‘I want it to be your decision. I want you to be happy with it.’

“Because he gets it because he’s an artist. He’ll like to sit around, chat with me, give me his opinion and feedback.

But ultimately of course I’m going to listen to him, but he’s like, ‘Make the decision for yourself.’ So yeah, it’s been cool.”

Avril – who has previously been married to Sum 41’s Deryck Whibley and Nickelback’s Chad Kroeger – has admitted that while ‘Bite Me’ is about going “through the ringer” in her past relationships, she’s actually in a really “happy place” with her beau, Mod Sun.

She spilled: “It was just time to rock again, and I have a feisty side to me. And with this single ‘Bite Me’, like, I’m in a happy place in my life, and it’s all like it’s fun and it reflects that.

“Even though like I’m reflecting on past stuff I’ve been through in relationships with love. Let’s face it – love’s not easy, right? And, I mean I’ve been through the ringer so like yeah I’m writing about it again…and I feel like ‘Bite Me’ is kind of about a guy wanting a second chance but not giving him the time of day because, you know, you did before… It didn’t work out, and having that self-respect.”

Listen to the full interview on Apple Music 1 now.

Related Topics:AvrilcubanflowLavignemusic newsworld music
Up Next

‘It’s a muscle I need to learn how to exercise’: Adele hints at future collaborations